How to compete in brand-to-brand competition when you are not #1. That was the topic of my recent dinner with Wah Hui Chu, former president of PepsiCo in China. Wah shared lessons learned from the worldwide competition between Pepsi and Coke.

In the U.S., Coke and Pepsi have had similar retail market share. Coke’s revenues outside the U.S. have been much higher, but their competitive position was different in each country. At the end of World War II, the U.S. military only carried Coke at its facilities abroad and Coke became the dominant soft drink in Japan, Germany, and other countries with a large U.S. military presence. Pepsi was dominant in Saudi Arabia and other parts of the Mid-East.

While Coke and Pepsi were competing head to head, PepsiCo acquired Kentucky Fried Chicken (KFC), Pizza Hut, and Taco Bell. Coke’s message to fast food outlets other than KFC, Pizza Hut, and Taco Bell became, “if you buy Pepsi, you are funding your competition.” Pepsi’s market share in the fast food service segment dropped precipitously. While PepsiCo may have seen diversification into fast food as more important than building market share for Pepsi, the soft drink, my guess is that PepsiCo did not fully anticipate the impact of the fast food acquisitions on their soft drinks business. They may have seen the fast food chains as new channels for Pepsi distribution.

For a long time, Pepsi competed directly against Coke in every market. After observing the low return on marketing and sales efforts in markets where Pepsi was weak against Coke, PepsiCo changed to the following strategy:

In China, Coke had a larger market share than Pepsi. Through much of the 60s, 70s, and 80s the two brands together had a relatively small share of the total soft drink market in China. Over time, Pepsi and Coke both grew substantially and the total market has seen high double digit growth numbers. In 1990, Pepsi’s China revenues were about $400 million against Coke revenues of $1 billion. Today, Coke is approximately $5 billion while Pepsi is at $2 billion. Coke has held onto the larger market share, but Pepsi’s investment in China has returned large revenue and market share growth.

The strategic insight was recognizing Pepsi’s (the product) competitive position in each market and the realistic options for that product in that market. In brand to brand competition, only invest where you have enough strength to change customer buying practices.

In Japan, Coke was dominant because of its association with the U.S. military after WW II. Pepsi decided to exit the market because no reasonable investment would change its market position. Vending machines are ubiquitous in Japan and vending companies selling Coke, the brand leader, would not also offer Pepsi. PepsiCo franchised its soft drinks business to Suntory, a leading beer company, with an agreement to sell them the concentrate to make Pepsi drinks. Suntory became the Pepsi bottler in Japan and put Pepsi in their vending machines. As a companion product to Suntory beer, Pepsi sales instantly reached levels not achievable as a stand-alone product in Japan.

No Beer, No Work!
My son Steve recently sent this picture from a food court in Seoul, Korea. In the U.S., I would expect to see the sign on a sailing crew’s T shirt or at a college fraternity weekend party. 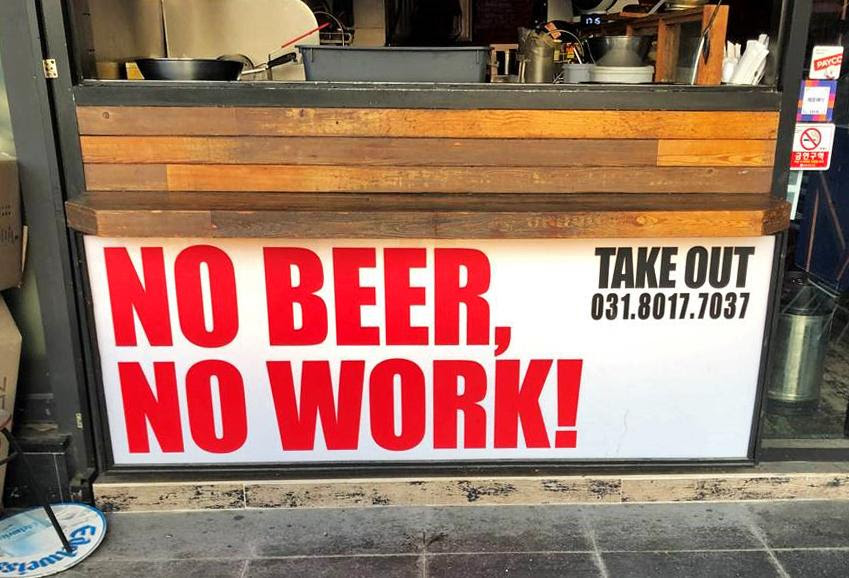